Twitter Jail (TJ) is term originating in the Twitter community that appears to be frequently misunderstood by the user community to describe the penalty box that Twitter puts a user in when exceeding usage allocation for messaging and following. It is important not to continuously trigger these limits as it may lead to Account Suspension. For the purposes of this post, I will discuss what I see as the 4 main sentences one can get and what can be done about them.

What are the Conviction Types?

Once in the 10 min follow,timeout a user must wait for a time period before being able to get up to follow more users.. Other capabilities still work like sending messages.

In the next two , a user must wait for a time period before being able to get up to date mentions or send tweets. The timeline page can still seen.

Twitter will briefly show a small box at the top of the screen showing the type of conviction you've received. It is not clearly shown, people don't see it, and some people think its a result of Twitter being slow. 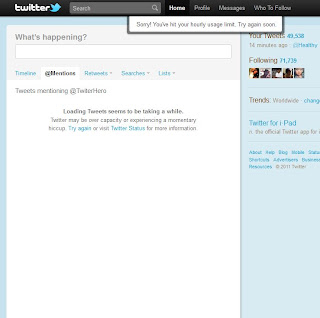 Twitter sometimes throws a curve ball and put me in TJ daily with only 128 tweets for the day. Further tweets can not be sent. Sometimes there is no justice, but its the best system we have got? 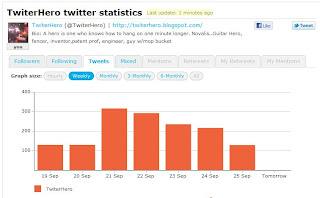 This is the error box that appears when trying to send another message:

You see a blank screen and a message of "Loading Tweets seems to be taking awhile". It is solitary confinement. You take care of your #Farmville crops, you laugh at G+. You blog. You don't drop soap. And you wait.

In the case of having too many followings, getting more followers or dropping people not following you back is a good use of your time. Tools like Tweepi http://tweepi.com/ are a good way to do this.

In the case of having too many Direct Messages (DM) - monitoring your overall daily use of the DM function with the counter function of DMs is important. It is difficult to keep track of the total count when DMing multiple people so it should not be used for the majority of daily communications, put the message in an @NAME mention. Limit DM for that special occasion or someone :)

Keep your tweet count down below the limits. Both tweets and retweets increase message counts. Keeping track of your count manually is tough since users are not shown how many messages are sent and not told the current limits.

One thing I've come to learn is that the published limits are not up to date and are now dynamic based on the load that Twitter is experiencing. I have been put in the big 4 hour timeout for sending as little as 200 tweets ( not the 1000 that used to be the cause). It is a mistake to rely on the old published rate values.

One thing I look for in the graph is a constant level of tweets. This tells me my current tweet rate limit, which is different for everyone, and indicates cases of rate limiting. In this graph I see different maximum tweets allowed during different date ranges. 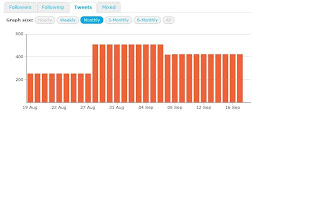 In this graph, I see daily rate limits at 225, 500, and 425. By looking at your own graph, you be able to see if you are hitting maximum daily tweet rate levels. I also look at my hourly tweet rates whenever I get busted to understand how much I am allowed to currently tweet.

I've looked at ways to determine my hourly rate so not to violate the hourly rate limit rule by using the Twitter API. Unfortunately, the numbers returned were not valid and I still ended up in Twitter Jail.

Come up with a number that has worked for you in the past and check your tweet counts when you tweet alot.

A feeling of relief will come over you once you are released. If you are like me, I suspect you'll be back in the slammer again soon, but if you follow some of the advice above, you can avoid having this happen to you. Let me know when it happens and I'll bake a chocolate cake with a saw in it.

ADD Your Name Below Now !!